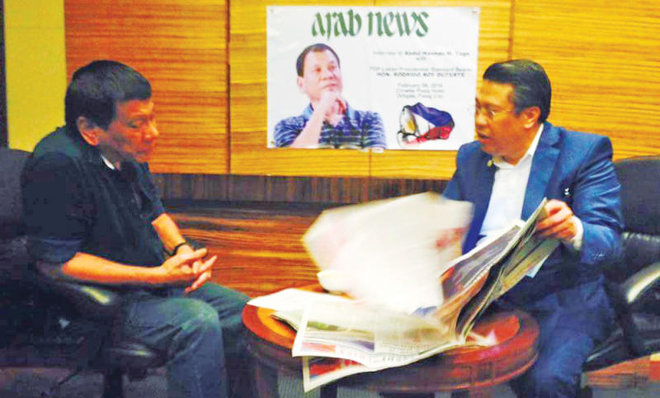 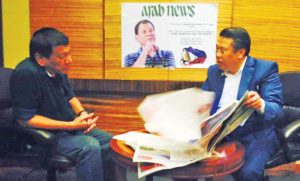 RIYADH: Mindanao will be reserved for Saudi Arabia and other Arab investors by simplifying rules for a hassle-free business environment, Rodrigo R. Duterte told Arab News in an exclusive interview much before his election as president of the Philippines.
The confidence the presidential candidate exuded while speaking in a one-on-one interview was remarkable, and also reflected his international policies, especially the Gulf where a very large number of Filipinos are employed. Moreover, Duterte expressed his desire to visit the Kingdom to further strengthen the relationship between the two countries once he is elected president.
It was a landslide victory for Duterte not only in the Philippines but also in Saudi Arabia. He bagged 76.30 percent votes in the Kingdom while his close rival got only 10.68 percent. Overseas Filipinos in the Kingdom can now look forward to happier days ahead as their country’s new president is the one who looks beyond local issues.
“We will simplify rules for investors,” he told this reporter in a one-on-interview in the Philippines in February this year.
“I would like to first address the Mindanao issue and you can have a better deal with me because I come from a mixed background. If you open my heart, half of it is for Mindanaons, the Moro and half of it for Cebuano, from where my father comes. I’m from Mindanao and I should know how to solve the problems.”
Duterte is the only Filipino official who banned smoking in public places. “I impose the no-smoking ban. We do report deaths due to vehicular accidents,” he said.
On secularism, he said “Davao has a mixed population. I do not allow even in basketball tournaments as Muslim team or Christian team … it’s always mixed.”
He said there is a six-month jail for discriminatory treatment, including for developers who do not sell housing units to a certain ethnic group. “There is a fair share of employment for everybody in various departments, including police,” he said.
Referring to the NPA (New People’s Army), he said: “I was a student when it broke up in the 1970s. I am 70 years old now. We will have to talk. I said separate this issue from criminality. Of course there’s violence in every revolution.”
Asked how he would run the country if he was elected, Duterte said: “I will start with the city and then focus on the country. I treat everybody equally. The resources of the city are for the entire population. And I am very strict as far as governance is concerned.”
Duterte said he is against firecrackers because they are “not good” for Filipino. “Every year, a lot of children lose their limbs, fingers and also lives. I don’t see any reason for continuing with this kind of practice. I’m also very strict about the traffic rules. Davao city is a place where there is law and order.”
On the wider aspect of the city, he said, “Above all, I govern effectively. For example, Davao has multi-ethnic tribes. I am for everybody; everyone must be heard, and you cannot do that at one time. Hence, you have to form a republican type governance with representatives from the Muslim and Lumad communities.”
The new president explained that Duterte has a deputy mayor for all tribes. “I have a deputy mayor each for the Maranao, Maguindanaon, Iranun, Kagan of Davao, then the Tausugs. We have a deputy mayor for Samal and even the Badjaos.”
Once, Duterte was very upset when the owner of a building complex refused to sell units to minorities. Asked what action was taken, he said, “We issued an ordinance to set things right.”
He said: “I just don’t want to hear religion being discussed. I forbid it. In the housing projects, selection of the police and the employers … I always see to it that there is fair play.”