By: Staff Writer I BFBCI 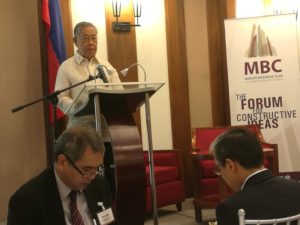 Davide was the guest speaker at the Joint Membership Meeting recently on Federalism Series organized jointly by Makati Business Club (MBC) and Management Association of the Philippines (MAP).

In his speech Davide said: “If the system succeeds in Muslim Mindanao, then the federalization of the rest of the country could follow.”

According to him BBL would be experimental before shifting to the federalism. He warned against the continuing “reign of the few” or political dynasty under the new system of government if not studied properly, adding, there would also be more private armies.

He however, reiterated his strong support to the passage of the BBL as priority of the current administration.

“Muslims in the country support BBL from very beginning as a clamor and aspiration however, it seems that majority of the Filipinos favor federalism.” BFBCI Executive Director, Abdul Hannan Tago said in his comment during the open forum part.

He ads, federalism would guarantee seats for some qualified Muslims in the senate while their chance to win in the existing system is almost impossible.